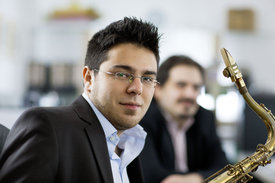 Gábor Bolla was born October 18 in 1988 in Hungary. He belongs to the rich culture of the Romany who has a great musical tradition that beards a lot of outstanding musicians. Guitarist Django Reinhard is their most renowned representative in Jazz. He became a legend for his unique melody phrasing and harmonical turns. His style and playing was very much affected by his cultural origin: In some cultures there is still a tradition of learning and discovering new things through self-education. This is the case in the Romany culture, in which unconventional playing techniques and styles have survived.

Gábor Bolla is self-educated. He learned to play the clarinet in a virtuoso manner as a young child and won the Hungarian “Music School Competition” by the age of 12. Inspired by his music-loving parents, Bolla soon discovered jazz for himself and started to play the saxophone. A career as a child prodigy followed: After only six months of practicing, Robert Maloschik from public Hungarian radio discovered Bolla and started to support him. Bolla got to play with the great Hungarian jazz artists and was invited to Getxo Jazz Festival in Bilbao, Spain. During this time, he also met his musical soul mate – the classically educated pianist Robert Lakatos “We are like brothers” Bolla comments his professional relationship to Lakatos.

At only 15 he reached the semi-finals of the prestigious saxophone competition at the Montreux Jazz Festival in 2003. He is the only teenager and Hungarian who has ever achieved this success. Thereafter, all doors stood wide open for him. He was invited to the world-famous Vienna Art Orchestra as a guest soloist and played with US stars such as Johnny Griffin, David Murray, Kirk Lightsey and Gregory Hutchinson. In 2004 Bolla was honored as “Talent of the Year” at the Hans Koller awards, a kind of Austrian Grammy which is very seldom given to non-Austrians. A year later his quartet received both the jury and the audience prize at the Avignon Festival. In April 2011 German newspaper “Frankfurter Allgemeine Zeitung” praised Bolla as “An improvisator of overwhelming individuality”.

Bebop has been an important source of inspiration for Bolla. It is his ambition to be on a par with all the famous musicians who have managed to redefine themselves again and again over the years. Searching and discovering as well as truly getting to know yourself and your sources of musical inspiration are Bolla’s guiding themes: “It is the most important thing for me to play the music I truly like the way I see it. I always try to find new things.“

As impressive as defining stages line Gábor Bolla’s way. In collaboration with Swiss jazz stylist Heiri Känzig on bass and world class drummer Jojo Mayer, as well as Robert Lakatos, Bolla deploys all his skills for his ACT debut “Find Your Way” (ACT 9529-2). In addition, the violinist Lajos Sārközi appears as a guest. “On this album we mainly tried to represent my Gypsy origin.” Bolla says. Nevertheless he does not miss out his other influences. Bartók, Monk, Rollins and Coltrane, Modern Jazz Quartet, Stevie Wonder or Django Reinhardt – it doesn’t matter where the young Hungarian’s inspiration comes from on his search for new sounds and for a musical identity of his own; with “Find Your Way” Gábor Bolla is clearly on the right track.