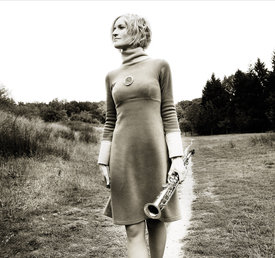 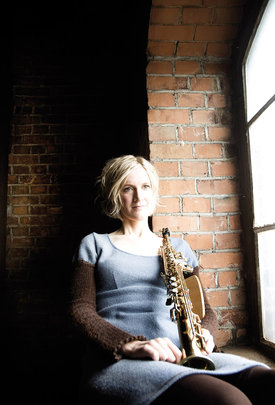 Greatness often lies in compactness. If you search for the important impulses in European jazz you won’t necessarily find them in the cities and densely populated urban centres of our world; instead we should look to the corners and countrysides, and a land of fewer than 5 million inhabitants - Norway. No other country in the world has produced more prolific jazz musicians, at least when compared with the number of its inhabitants. Jan Garbarek, Nils Petter Molvear, Silje Nergaard and Bugge Wesseltoft are only the well established stars. In addition to these, new and highly promising musicians are also regularly stepping into the limelight. 32-year-old saxophonist Frøy Aagre from Tønsberg is one of these rising stars from the land of the Northern Lights, and Cycle of Silence is her ACT debut.

Aagre’s “Nordic Jazz” tells of an expectant calm, sharpened perception and distances which give space to breathe. Her Cycle of Silence sounds calm and dream-like. Her warm saxophone sound and seductive lyricism captivate the listener and fuse naturally with the other members of her wonderful rhythmic group. The composed and the improvised join to form a harmonious whole. Modern jazz elements are skilfully intertwined with classical music and special guests, including trombonist Øyvind Brække, also add their special touches.

Today Frøy Aagre lives near Oslo, by the sea, yet she is far from having the mentality of a recluse. As a student she went to Birmingham where she was able to study classical and jazz saxophone alongside Indonesian gamelan music. She was part of London’s vibrant jazz scene, learnt tango in Buenos Aires, and studied with David Liebman in New York. These years spent travelling broadened her perspective; it may be surprising to learn that one of the jazz saxophonist’s favourite musicians is Johann Sebastian Bach; “I particularly like how naturally and organically his music flows,” she says. “My music may sound Norwegian but I have collected influences for it from all over the world.” Aagre also studied the composition techniques of the 20th century at Oslo’s music academy and learnt about Schönberg’s methods as well as Messiaen’s synesthesia.

“Regardless of whether you are a jazz fan or not” – Norwegian radio warmly recommended Frøy Aagre’s debut album, Katalyze, to all its listeners in 2004. Her second album, Countryside, was voted by the daily newspaper, Dagsavisen, as one of the top ten jazz albums of 2007. In particular, it was the great richness of the composition, melodies and the great imaginative scope of playing which impressed. The journalist Stuart Nicholson (Jazzwise, UK) called her compositions “quiet triumphs with solos which develop from deep within the soul of the pieces.”

Aagre’s success has come about not by chance. With Andreas Ulvo (who also plays the piano with trumpeter Mathias Eick), on the piano, bassist Audun Ellingsen and Freddy Wike on drums, she has some of Norway’s finest young musicians in her quartet. “This group really works as a band,” praised All About Jazz. To experience a concert by Frøy Aagre is to be enchanted. Guests including trombonist Øyvind Brække (well known from his collaboration with Trygve Seim), French horn player, Trude Eick, as well as cellist, Sigrun Eng broaden the range of sounds.

For Cycle of Silence, Frøy Aagre focuses fully on the soprano saxophone; a form of self limitation which fully brings to bear the captivating naturalness of her incredibly mature music. “As Steve Lacy said, it is a very jealous instrument. I reach deeper and deeper layers of the sound, the more I play it. And, even though I am actually influenced by tenor players such as Jan Garbarek, John Coltrane and Dexter Gordon, I have found my own sound on the soprano.”

Frøy Aagre’s own sound runs through all twelve tracks of Cycle of Silence. The album is a tale of experiences: “Long Distance” deals with the subject of far-off conversations, as well as Aagre’s love of hikes in nature. She noted her first thoughts on her mini suite “Siberia” on a flight over the Russian landscape. “There were no clouds in the sky for the entire flight and you could see the Siberian landscape transform from rugged mountains into gentle hills and empty tundra. I had never seen anything like it.” With “Steam Train”, at the beginning of the album, Frøy tells of her favourite railway journey from Oslo to Bergen, while she says farewell to listeners with the prospect of a “Neverending Journey”. A journey that should be enjoyed – provided you have Frøy Aagre’s music with you!