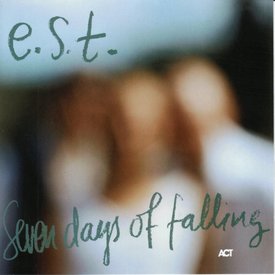 On Saturday March 9, 2002 a select number of people assembled at midnight for a secret release party – by invitation only - at London´s legendary "Pizza Express Jazzclub", the same place that had been the inspiration for e.s.t.´s former "Good Morning Susie Soho" album (ACT 9005-2). It was like a Who’s Who of Europe´s festival programmers, record company executives and journalists. And the event? The release party for e.s.t.´s brand new album "Strange Place for Snow" (ACT 9011-2). That evening was to signify the starting point for the international breakthrough of the band.

Nearly 100 concerts (in 18 countries) and 6 major European awards later, the band had taken Europe by storm. e.s.t. had been voted "best international act" by the Victoires du Jazz in France and by the BBC in England. They had received the German Jazz Award and the German Critics Award for the "Best Album of the Year". They had been given the Guiness Jazz in Europe Award in Ireland and the "Revelation of the Festival Award" at Midem in Cannes. "Strange Place for Snow" nearly tripled sales of previous e.s.t. albums and even took the band to the USA where it was released by Sony Columbia. As a result, the band played a complete tour of the States  – probably the only European jazz act that did so in 2002.

On Monday March 10, 2003 almost exactly a year after that remarkable evening in London Esbjorn Svensson, Magnus Öström, and Dan Berglund met at Stockholm´s Atlantis studio to begin sessions for a new album. It took them eight days to record and five days to mix  "Seven Days of Falling"  – an unusual amount of time for a jazz recording and more in keeping with a pop production. This whole approach reflects the philosophy of the band - whether it be their live performances (they have their own sound and lighting engineers), their image, or their recordings (prepared in week-long rehearsals, culminating in two recording sessions, each one four days long). Nothing is left to chance – attention to detail can be seen throughout the entire process.

To gain the necessary inspiration the band likes to take time off in the months previous to a recording. Residents of Esbjörn´s home town Enskededalen (which is located on the outskirts of Stockholm) can witness the long walks of their now famous musician through the nearby woods. "I love to walk – two three hours a day – no problem – it gives me inspiration". This inspiration is the key to the music of e.s.t., to the melodies that catch your ear and pull you into their magical world.

During the ten years between the recording of their first album "When Everyone Has Gone" (Dragon 1993) and  "Seven Days of Falling", the band has grown together and formed its own unmistakable voice and sound. They have never followed trends or mimicked past heroes: e.s.t. have created their own music and their own style.

None of the trio took the conventional route of the jazz musician by attending university and learning about how their forefathers played, or how to be technically perfect. As a result, their ears have been open to all types of music and approaches to playing – which is probably why you get answers like "The Police" or "Deep Purple" or "Radiohead" or "Aphex Twin" when you ask them their favourite bands.

"Seven Days of Falling" is the most mature recording of e.s.t. to date. It is a development that can be traced back to "Dodge the Dodo" from "From Gagarin´s Point of View", continued with "Spam-Boo-Limbo" and the hidden track on "Good Morning Susie Soho"  (on which e.s.t. experimented with the most amount of electronics and unusual sounds than ever before) to  "Behind the Yashmak" on 2001’s  "Strange Place for Snow" album.

"Seven Days of Falling" features wonderful ballads "Ballad for the Unborn" and "Why She didn´t Come" and guides us through great musical landscapes, but it is songs like "O.D.R.I.P." and "Elevation of Love" that set the pace. The e.s.t. magic that has captured so many admirers is still very much present in their compelling themes, Esbjörn Svensson’s seductive piano melodies, bassist Dan Berglund’s use of bow and sound effects (with Hendrix-like results) and drummer Magnus Öström’s accelerating drum’n’bass beats.

Asked what creates the magic of e.s.t. recordings and concerts most people say that it is "in between what is being played". Esbjörn, Dan, and Magnus leave room for the music to breathe into the minds and souls of the audience.

The album will be out in the shops on September 22, 2003 and twelve days before this, the band will once more host a legendary release party. This time it will take place in Paris´ Cite de la Musique – not a club, but a 1.100 seat theatre, the large size of which reflects the success of the band in the past year. 89 concerts are planned for 2003, a tour in the US as support to K.D. Lang, tours in Germany, Austria, Switzerland, Norway, Sweden and Canada and performances in the capitals of England, Spain, Portugal and Italy. For the first time e.s.t. will tour in Japan. Due to their enormous success and high demand for tickets, they will be playing larger concert halls, rather than small clubs.


e.s.t. have become one of Sweden´s success stories and when Esbjörn opens the shows with his "we are e.s.t. from Sweden"  everybody is taken by the charm and modesty of these Ambassadeurs of great music.