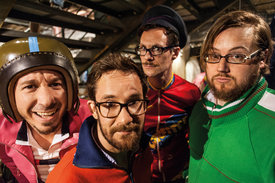 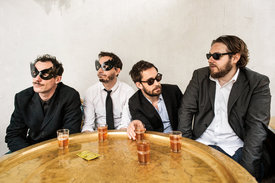 Ten years have gone by since this quartet — under a name of pure convenience — undertook the Suite for the first time, a jubilant voyage through varying climates which the quartet covered in a flux of juvenile energy, constant musical tension, and that palpable feeling of urgency… one could sense it inside the heady scents of the pleasure of collective playing.

The ensemble was acoustic, the current electric, and the voltage high. It was a miraculous moment and it had the taste of a first experiment. At the time, the quartet was still expressing itself in the language of swing, delivering a wild, hard bop enlivened by brief outbursts of free and other, modern, jarring discordance. It had a fossilized radiance. While Spezial snack seems today to be light-years distant from the music offered at the time, the trajectory taking the group to this new terra incognita still has logic. Remaining intact, the identity of the group has simply matured over the course of some stern questioning. Haricot-guide, the latest opus in their cartoon-esque vein (urge versus narration), is an implacable demonstration of this.

What separates this piece from the not-quite-worn blues of their debuts? There's the same, cohesive sound which strikes you right from the first bar; there's the same light sense of parody; and they also show the same, playfully natural manner of mining quaintly outmoded chord progressions through elastic rhythms, micro-events and combinations of timbres. They have rapidly developed their own palette and playing mode, interacting and exchanging glances. They also had a few skilled strings to their bow: clichés, which the quartet has never ceased to develop, are also a form where innovation is possible.

An unexpected clash of cymbals, a cluster of piano, the odd bruitist hatching… these and other little nothings have progressively invaded their music to the point of becoming its raw material. No more solvent, merely the essence, its spirit. In the course of Les Flics de la Police, an embryonic melody works its way through a jungle of exotic rhythms. The music is first and foremost a territory, by turns deserted and lush, where the listener's vigilance is permanently mobilized.

The lyricism here, the pivot around which their collage-screenplays are articulated, is no longer a condition but a hypothesis, and the orchestrations have become as central to their works as they were for the 20th century composers they all admire. This logic is pushed to its paroxysm in Potofen, and even beyond in François, both of which titles are theatres for military operations which clearly state that, faced with the intransigency of each of the four musicians, no compromise is possible.

The material they propose is above all the subtraction of what it refuses to be. And so the conflicting nature of their relationships is exposed in broad daylight, and the only possible path it can take lies in the organization of chaos, with all its instantaneous alliances and circumstances. Who is playing with whom? At what moment? By focussing on the unisons which form and separate, the vital thread of this music suddenly becomes limpid. And listeners can then rediscover the pleasure of spectators watching an adventure-film: fascination, barbarian hordes blocking the trail, and a cathartic battle suspended in a flash in the final bar… The quartet had accustomed us to a kind of darkness, but never has it been this deadly.

In an afterlife of the blue note, the melody of Mazout Damnation develops in constantly unsuspected fashion, wrapped in a phantasmagorical setting whose required victim congeals inside a space-time airlock. Darkness or light? Ascent or Fall? A few Expressionist chords open the sluices: a deluge of notes, an autistic riff, and savagery. The ultimate step in colour saturation comes in the free tutti. A free form, as they said of Calder's works, or the design of reconstruction. For this quartet is the heir to those experimenters who opened wide the windows onto codified genres, both in music and elsewhere. The group hasn't plundered their aesthetic, but transposed their approach onto our own, ultra-referenced time. It has chosen the most radical path, and is our indispensable contemporary.