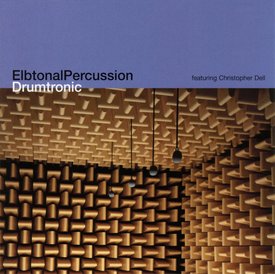 ElbtonalPercussion was founded in Hamburg in 1996 by the drummers Jan-Frederick Behrend, Stephan Krause, Andrej Kauffmann and Wolfgang Rummel, originally going under the name ElbtonalSchlagwerk. The starting point for these four musicians’ innovative concept came at the famous Conservatory for Music and Theatre in Hamburg. They inspire audiences with a high quality of broad-based percussion music. They are regularly hired for orchestral, theatre, film and radio productions.

Influenced by a whole palette of styles such as classical, contemporary and world music as well as jazz and rock, ElbtonalPercussion has made the accessibility of percussion music in all its intercultural breadth as its main objective. The choice and combination of the various instruments which have evolved over 1000 years from 100 cultures results from a search for a sound. Marimba, xylophone, vibraphone, African, Asian and European drums, cymbals, gongs, bells and drums offer a range of sounds almost without boundaries.

The ensemble has worked over recent years with eminent composers such as Helmut Lachenmann, Matthias Pintscher and Keiko Abé. It has performed contemporary works with the Choir of NDR (North German Radio), Hamburg State Opera and John Neumeier’s Hamburg Ballet and at many well-known festivals. In Hamburg, ElbtonalPercussion has collaborated with the organist and conductor Claus Bantzer.

The lack of an original repertoire has encouraged the ensemble to create its own works, experiment with new concert forms, involving live electronics as well as collaborations with artists from other forms (media design, dance, performance, theatre)

After two classic albums "percussion works" and "time twists" the innovative quartet releases, as part of the new ACT: NU JAZZ SERIES, a fascinating and dazzling jazz crossover album which includes elements of electronica: DRUMTRONIC (ACT 9601-2). In this production the ensemble is congenially supported by a further percussionist, one of the leading vibraphonists of his generation: Christopher Dell.