Don Friedman
Piano Works VI: From A To Z 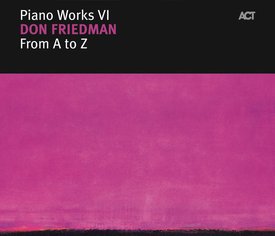 Piano Works VI: From A To Z

Heartfelt tribute to a companion:

The very first notes indicate that an important characteristic of jazz solo piano recordings is especially true in this case: They are often affairs of the heart, intimate statements in which the artist’s choice of repertoire betrays what moves him most. Born in San Francisco in 1935, Don Friedman uses this opportunity to transform into music the deep and still tangible memory of a great one time musical companion. Attila Zoller (1927-1998) was born in Hungary. He was Friedman’s partner for such outstanding recordings as "The Horizon Beyond" (1965). The first four tunes on this album are compositions by Zoller; the final one is Friedman’s "Blues for Attila", and the album is a true A - Z (or: from Attila to Zoller) of passionate jazz piano music.

This seems to be a prerequisite for Don Friedman: He always employs his brilliant technique to achieve an evocative atmosphere. From the very first piece "Meant To Be", the music draws us in by its combined tenderness and profundity. Friedman does not simply interpret the music, his playing conjures up an image of Zoller sitting next to him and listening. It is – among other things – an intimate performance for a friend, Zoller’s lyrical "Alicia’s Lullaby" being an excellent example of the way this quality is directly transmitted to the listener. Equally, it is fascinating to witness the musical relationship between Zoller and Friedman. Zoller was a musician of unusual melodic inventiveness, who found his sound by using elaborate chord progressions: Harmonic lushness combined with linear perfection and a cunning sense of form and tension. These are attributes, which also accurately describe Don Friedman’s qualities as a pianist.

Friedman is a linear poet. His harmonic repertoire is full of surprises. He is a master of musical drama. His playing has an abundance of iridescent colour and refined detail, as illustrated by his subtly shaded palette, and the clearly structured pianistic eloquence on Cole Porter’s "I Concentrate On You" or Thelonious Monk’s "Ask Me Now". Only great jazz pianists are able to bring together abundance and strength of definition in as masterly a fashion as Don Friedman does here. He employs percussive accents to roughen up the delicate flow of musical thought. He has an admirable way of connecting the expected with the unexpected, and constantly unearths surprising notes, especially in the deeper structure of the pieces. The path taken even by the piece "Straight Ahead", in its grippingly contrapuntal bridge, is anything but what the title suggests.

This music is a pertinent tribute to Attila Zoller. Zoller was a master of avoiding the trite, as Friedman is, and has always been. The more often the listener lets himself be absorbed by these recordings, the more their unusual quiet strength will act. The strength of a heartfelt tribute.