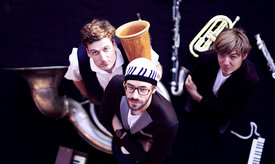 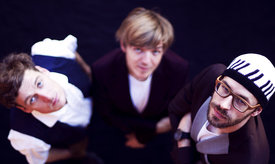 Austrian pianist David Helbock has been called “a consistent trail-blazer” and “a gifted story-teller at the piano” (quote from 3sat Kulturzeit). In his ACT debut album “Into the Mystic” (2016), he left his personal and individual imprint on well-known compositions from Beethoven to Thelonious Monk and John Williams, setting them in a context of  mythology, legends and the spiritual.

For this new outing with the Random/Control Trio, Helbock concentrates mainly on pianists who have been his musical role models. His new album is a “Tour d'Horizon” – as the title suggests –  of the greats of the jazz piano. “For this album I have chosen pieces by my favourite jazz pianists, the ones who have expanded my artistic horizons.” His 12 interpretations form a broad arc, ranging beyond the jazz sphere to include Spanish classical composer Joaquín Rodrigo, with the popular second movement of the “Concierto de Aranjuez” –   reminds us of Helbock's background in classical music. Carla Bley is included with “Utviklingssang”, a tune based on just one melodic fragment. The piece proves, as Helbock explains, that she “is a complete master of the simple but ingenious melody that stays in the listener's ear and immediately establishes a mood.”

When it came to songwriters, two fellow musicians who were both hugely influential composers in their time proved shoo-ins for this album. Naturally, Duke Ellington is there. His “In A Sentimental Mood”, says Helbock, “occupies the middle ground somewhere between his epoch-defining suites and his danceable chart-toppers, and feels like a good choice.”  And there is Esbjörn Svensson, who died exactly ten years ago, far too early. Svensson’s innovative combination of dynamics, groove and melody brought into being a new and broad stylistic movement in jazz. Here David Helbock gives an impressive and vivid account of “Seven Days of Falling”.

There is also a pianist whose influence Helbock absorbed extraordinarily early: “I have a very special and emotional relationship with Keith Jarrett’s music,” he says, “because my mother listened to his music through her pregnancy, so I suspect that the first music I ever heard, even before I was born, must have been ‘My Song’.”

Herbie Hancock's “Watermelon Man” stands for Helbock's musical awakening as a teenager: “The first album I bought for myself was one of his Greatest Hits compilations”. Joe Zawinul is not to be overlooked either, as he is an illustrious forerunner for Helbock, an Austrian who conquered the world of jazz. Miles Davis' “Blue In Green” and Paul Desmond‘s “Take Five” are two pieces not actually composed by pianists, but which are nevertheless indelibly associated with the giants of the piano who played in the bands that first recorded the tunes, Bill Evans and Dave Brubeck.

‘Covers’ is an inadequate word to describe the way Helbock interprets and adapts these pieces, his approach to the classics of jazz piano history is far too individual for that. And originality begins with the instrumentation he uses: Helbock has entrusted the project to his percussionless Random/Control Trio with two multi-instrumental wind virtuosi Andreas Broger and Johannes Bär. These friends from the Vorarlberg region of Austria have already made a name for themselves as humorous sound anarchists at the ‘Holstuonarmusigbigbandclub’ (HMBC), and have even climbed up the pop charts. This pair of one-man bands brings a particular brand of anarchy. They always follow a pre-conceived plan, whether it be in the bands of Matthias Schriefl or Phil Yeager. This approach is to the fore in Abdullah Ibrahim's tune “African Marketplace”. It bursts with joie de vivre, and provides the ideal entry point into this “Tour d'Horizon”. Using over 20 instruments including a didgeridoo and a tuba, they make sense of the title quite literally. Helbock doesn’t just play the keys of the piano, he also hits the strings directly and plays percussively on the piano’s wooden case.

Shrill flutes, beatboxing voices or synthesizer sounds... this trio of whirling dervishes use everything imaginable – and more –  in a rousing power trip through Helbock's highly personal musical history. The jazz spirit of “Tour d'Horizon” fires up the glowing embers of tradition and turns them into a blazing beacon for the future.