Music from which there is no escape 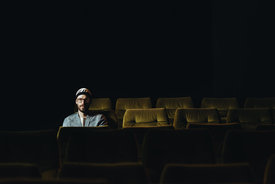 We all have the music in our lives from which there is no escape. It reaches deep inside, becomes planted ineradicably in the memory. Other, extra-musical occurrences can often get mixed in with the experience of listening, which has a way of imprinting the music on the mind even more firmly. This was what happened to David Helbock when he discovered cinema for himself and had his first encounters with the music of the American film composer John Williams: "He’s been with me just about all of my life. I can still remember clearly how as a child I saw "E.T." countless times and was excited about the extra-terrestrial being and his human friends. Or “Jurassic Park”. That was the first time I went to the cinema without my parents. And I won't forget how my feelings would flicker between fascination and fear when I first saw the shark in "Jaws". These were all deeply emotional and formative experiences for me, and it was always the soundtrack to the films that was at the root of them."

But why is John Williams’ music quite so effective, how is it that his music comes straight to mind when one thinks of any of the films in which he has been involved as composer? " Helbock explains: "Of course his music in the films is magnified onto a grand scale, and also wonderfully orchestrated. But deep down, Williams is a great writer of melodies. They touch the heart profoundly, they release emotions. Take “Hedwig's Theme" from “Harry Potter”, it’s a simple but incredibly deeply felt melody. Or the emotive theme from “Schindler’s List”. That is why, for me at least, Williams is a film composer of the old school, compared to more modern composers such as Hans Zimmer, who focus much less on musical composition, but rather on effects and sonic ostentation". There is an anecdote which illustrates the extent of Williams’ concern that the essence of a film should be conveyed through its music. "Because he was so impressed by "Schindler’s List", he at first didn't dare to compose for the film. He feared that his artistic abilities might not be sufficient for this great film.

So Williams went to director Steven Spielberg and said: ‘Steven, you need a better composer than I am for this film.’ To which the film director replied: ‘I know! But they're all dead.’ Encouraged by this idea, Williams went into action and composed the main musical theme of the film. Another unforgettable score is the music for "Jaws". Simple, but highly effective is how Helbock describes it: "There isn’t anything particularly horrific to see in this film, compared to today's horror films. But the music makes it incredibly exciting. It’s just the same two notes in a steady rhythm, but whenever that rhythm comes, it just grips you."

"I've done all kinds of things with John Williams' music," says Helbock. "I’ve re-harmonised it, I’ve used different time signatures and much more, so that my own voice can flow naturally into it. But despite all the alterations, the melody always stays the same and remains recognisable. Much of the process of adaptation was done intuitively, driven by the emotions that the films sparked in me. So I wrote down the main melodies, I watched the films, before finally developing my improvised versions on the piano and slowly extending them.

The music of John Williams for solo piano seen through the prism of jazz – it all fits together well, and in several respects: the film composer himself has jazz roots. During the time he was studying piano at the Juilliard School in New York, he also played jazz in bars. That influence can still be heard today, for example in "Moonlight" from the film Sabrina, which is a genuine jazz tune. And there's another thing: "Of course Williams quickly developed into a classical orchestral composer, but for me, the piano itself is an entire orchestra with a panoply of possibilities in sound. Even more so when I use various techniques of going inside the piano, i.e. damping strings with my hand, playing chords directly with my fingers on the strings, or using the piano frame as a percussion instrument." Helbock shows here that the piano and the orchestra don't have to be as unlike each other one might think they are. And so this "storyteller at the piano" (3sat) gives us a very different John Williams from the one we know from the cinema, but the man in the picture remains unmistakably the doyen of film music himself.