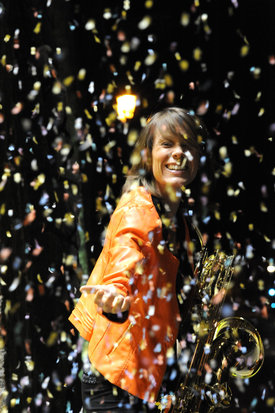 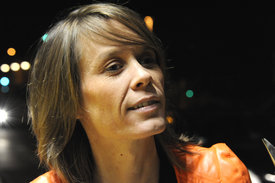 Cover art by Mimmo Paladino used with permission of the artist.

The baritone saxophone is seldom heard outside brass sections of big bands. As a solo instrument or as the only brass instrument in a band it is a real rarity and there is only one female baritone saxophonist who truly masters her instrument – Céline Bonacina. You might be surprised to see the petite Frenchwoman pick up an instrument that is almost the same size as her but, when she starts playing, the mésalliance becomes a symbiosis and the sound flows out without effort. The initial fascination that arises from this seemingly exotic combination only lasts for a few bars. It soon becomes apparent that the instrument is the ideal platform and mean of expression for this unique musician to unfold her immense creativity and to display her open heart for the diversity of jazz.

“Open Heart“ is also the name of her new album. Similarly to her impressive ACT debut “Way of Life”, for which she was nominated for the “Victoire du Jazz” prize and selected as one of five “Rising Stars” of the “Take Five Europe” scheme for emerging artists, the name again speaks for itself. Due to her vitality, passion and openness for harmonies, various influences from her earlier career are brought together on this album: her classical saxophone education, her experience in big bands, the trio that she has recently formed with the excellent drummer Hary Ratsimbazafy from Madagascar and electric bass player Kevin Reveyrand with chanson and world music experience as well as the seven years she taught music at the La Reunion.

Together with the impressive technique that includes voluminous tones, clicking sounds and multiphonics, the result is a power of expression that is unique for baritone saxophone. From French impressionism in the miniature-like intro of “Souffle d´un Songe” (emphasized by the music box tones by Satie) to rocking “Circle Dance” driven by drums and bass. “So Close So Far” is in the sound of the 60s between light sounds and hard bop, whereas “Out of Everywhere” sounds like a traditional bebop piece. If David Sanborn, the master of soft soul music, had played baritone saxophone, it might have sounded like Céline Bonacina on “Bayrum” and on the bonus track of ACT’s Jubilee Concert she gives Michael Wollny’s “Lonely Dancer” the warmth and intimacy similar to Ben Webster’s tenor saxophone. There are also East African elements and sega rhythms from La Reunion on “Wild World” and “Desert”, both compositions spiced up by the percussion sounds of Mino Cinelu, the three-time Grammy awarded guitarist and drummer, who has played with an impressive range of jazz and pop stars, such as Miles Davis and Peter Gabriel.

On almost all the compositions on “Open Heart” Bonacina is joined by prominent guests: the metallic timbre of Pascal Schumacher’s vibraphone, who was recently awarded the Echo jazz prize, can be heard on several pieces, singer Himiko Paganotti sings in the background and appears as a soloist and co-composer on “So Close So Far” as well as on the funky duet “Snap the Slap” with Bonacina’s almost-singing baritone saxophone. ACT fans might recognize this voice: she sang on Nguyên Lê’s “Songs of Freedom” and the French-Vietnamese guitarist has also arranged this cooperation. One of her biggest supporters Lê, the globetrotter with his own unique style, could also be credited with her discovery. Having recommended Bonacina to ACT, he co-produced “Way of Life” and joined in on four songs. Lê’s message in the liner notes is short but sweet: “Celine, may your career be long and prosperous!” and, with the help of his production on “Open Heart”, this wish very likely to come true.