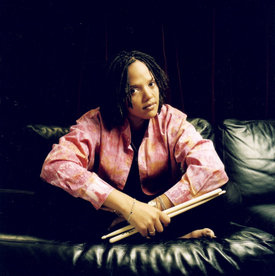 Terri Lyne Carrington is one of the world’s most-sought after drummers and one of jazz’s leading female media figures. Her recording and touring with Herbie Hancock and Dianne Reeves have elicited rave reviews internationally. In addition to her recording and international performing, she is renowned for her role as a producer and jazz educator.

Born in Medford, Massachusetts USA in 1965, already as a child Terri developed a reputation jamming with jazz greats Dizzy Gillespie, Oscar Peterson, Les McCann and Clark Terry, among others. A full scholarship at age 11 to The Berklee College of Music gave her the opportunity to meet and play with younger generation jazz notables including Kevin Eubanks, Mike Stern, Branford Marsalis, Pat Metheny and Greg Osby.

In 1983, encouraged by her mentor Jack DeJohnette, she moved to New York and started working with Stan Getz, James Moody, Lester Bowie, Pharoah Sanders, Cassandra Wilson, Dianne Reeves, David Sanborn and Wayne Shorter. In 1989 she moved to Los Angeles where she became the house drummer for the "Arsenio Hall" television show.

Her recent song-writing and production collaborations with Gino Vannelli and the Danish singer Stig Rossen, as well as her activities as house drummer on the late night TV show "VIBE" are very much in the public eye and ear.

Terri Lyne Carrington’s first CD for ACT: JAZZ IS A SPIRIT (ACT 9408-2) is modern American jazz at its finest and was released on March 2002. Two years later it was followed by her album STRUCTURE (ACT 9427-2).