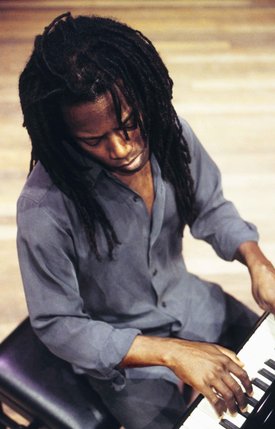 Ramón Valle (born 1964) was only seven years old when he began studying the piano at the Escuela Provincial de Arte in his home town of Holguín, Cuba. He graduated from Havana's Escuela Nacional de Arte in 1984.

His exceptional talent was discovered in 1985 when he performed in a double concert with fellow Cuban pianist, Emiliano Salvador, who died prematurely seven years later. As a solo artist and as leader of the jazz quartet Brújula, Valle appeared at numerous festivals (Mexico DF, Bogotá, Havana Jazz Festival) and was soon an established name in the Cuban and Latin American jazz scene.

In 1991 Silvio Rodríguez, founder of the Nueva Trova, asked him to join his band Diákara, which he stayed with until 1993."The greatest talent among our young pianists." Chucho Valdes, prominent musician and founder of Irakere, used these words to introduce Ramón Valle on his debut album Levitando (1993). On this first CD, Valle revealed himself as a pianist with a sound of his own. Although the influence of classical music and jazz, especially of the triumvirate Jarrett-Corea-Hancock can be heard, the remarkable thing about Valle's music is his ability to weld these diverse influences to create a unique style that eludes traditional categories.

Rather than being a pianist who plays Latin Jazz or Cuban Jazz, Valle is a Cuban jazz pianist. He produces pure, contemporary jazz. Although clearly present, his Cuban roots never form the basis of his pieces. In his own words, "I am a Cuban musician who falls within the category called 'jazz', but my music borders on many other musical forms. Sometimes I feel like a troubadour, because I tell stories, stories without words."

When he first performed in Europe - invited by Barcelona's Jamboree Jazz Club - critics were surprised by Valle's virtuosity and technical perfection. Under the headline "Well-Earned Success", Spain's leading newspaper El País described him as "a pianist with incredible technique. Besides being extraordinarily rhythmic, there are also depths of subtlety in his touch. His version of contemporary jazz is unexpected, versatile and seductive. A pianist with a great future."

After this European debut, Ramón Valle went on to great success at other European and Latin American venues. That same year saw the release of Piano Solo, his second CD. Comprised once again of his own compositions, it was characterized by great originality and powerful lyricism, but especially by Valle's ability to evoke diverse atmospheres within a single composition.

In 1998 Ramón Valle settled in Europe, where his tours of Germany, Spain and Scandinavia have elicited unanimous praise: "Valle is pure energy... a whirlwind that drags along everyone and everything... Valle is risk, challenging the audience with unbounded creativity that refuses to bow to the slightest concession... Valle is Jazz... Valle demonstrates that the world of jazz needs to reserve a separate chapter just for him..."

In 2002 Ramon Valle started to record for the renowned German label ACT. That year saw the release of "Danza Negra" (ACT 9404-2) dedicated to the compositions of his famous fellow Cuban Ernesto Lecuona.With the release of "No Escape" (ACT 9424-2), his second album for ACT, Ramon Valle not only makes a name for himself as a composer of brilliantly unique music, but once again excels as a Jazz musician beyond categorization,  a master of all the facets of contemporary playing.At the same time Valle charms audiences with the charisma and expressiveness he brings to his renditions. His relationship with the piano is completely physical. His musical stories grip and enchant from the first. They tell themselves.