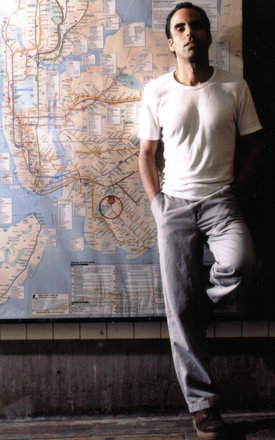 David was born in Miami, Florida and was raised in Southern California. He attributes playing and studying Jazz with the fact that his parents were both huge Jazz fans. The sounds of Coltrane, Miles, Bobby Hutcherson, Wayne Shorter and jazz in general, were always to be heard as he was growing up. There were also the sounds of Milton Nascimento, Jimi Hendrix and Sly Stone and other kinds of music that gave Dave his interest in a broad spectrum of music.He started studying saxophone with various teachers in and around Los Angeles. Moving to New York City at the age of 19, he studied with Phil Woods, Dave Liebman and George Coleman.

He worked various day jobs in New York, studied music on his own and played music gigs at night.In 1989 he was awarded a NEA grant and he used that to record his first CD "Point Game" which featured Marvin "Smitty" Smith, Edward Simon, Adam Rogers and Lonnie Plaxico. It was released on the French label Owl Records.David has recorded 4 CD's under his own name since been a founding member of Lost Tribe and Lan Xang and has recorded on many recordings as a sideman including two with Uri Caines `Mahler Project´, Drew Gress's `Jagged Sky´ and Medeski’s `Martin and Wood´. In 2001 David Binney released his debut album on the German based label ACT. For the recording of `South´ (ACT 9279-2) he  invited some of his closest musical associates: Uri Caine on piano, Chris Potter on tenor saxophone, Adam Rogers on guitar, Scott Colley on bass and the two drummers Brian Blade and Jim Black.In September 2002 David Binney released his next CD "Balance" on ACT, with Uri Caine, Wayne Krantz, Tim Lefebvre and Jim Black, a.o.

Stereophile says: "Dave Binney possesses one of the most original minds in contemporary music".